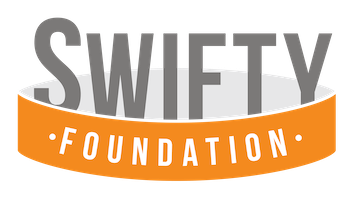 Mission: The Swifty Foundation’s mission is to raise funds and awareness for pediatric brain cancer research by supporting:

Prior to being diagnosed with medulloblastoma at the age of 10, Michael Gustafson was the fastest kid in his class, took first place in the state gymnastics meet on pommel horse, and was a handstand champion. When headaches and vomiting took us to the ER, we should have known something was terribly wrong when the Dr. said, “Well, he’s not very coordinated.” That’s really when our lives changed forever.

A craniotomy was performed at Comer’s Children’s hospital shortly after that. Michael had six weeks of proton radiation and chemo at Mass General followed by 6 more months of in-patient chemo at Comers.

Michael was in remission for 12 months when the spots returned on his brain and spine. Upon recurrence Michael’s chance of survival fell to 5%. Michael lived for another 4 years receiving more proton radiation to his spine and stereotactic radiosurgeries to mitigate the tumor growth in his brain twice. We tried alternative therapies and tried for compassionate use of a promising oral medication but were stalled until it was too late for the experimental drug to have effect.

Throughout it all Michael went to school, continued his athletic pursuits, excelled in school all while struggling with his potential death. He finally found meaning and purpose in starting his foundation, the Swifty Foundation and in implementing his Master Plan, which was “To donate my body to science so they can use me to find a cure for cancer.”

Michael donated his brain and spine to researchers in Canada and the US. Donating was difficult, neither hospital we were treated at could help us donate his tissue. With the help of KidsVCancer and our dedicated pediatrician, we were finally able to make his dream a reality. Since that time, Michael’s Master Plan became Swifty’s Master Plan.

We belong to CAC2 a collaborative network of nonprofits, corporations and individuals from across the US and other countries to advance a variety of childhood cancer causes by unifying these diverse groups’ efforts.

We have spoken at various conferences about the great need for and lack of post-mortem brain tissue.

We have gathered researchers and pathologists to develop best practices around post-mortem tissue donation.

We have funded brain cancer research with other family foundations.

We highlight the work of other family foundations in our social media and blogs.