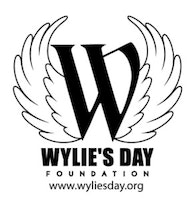 Why was Wylie's Day Foundation created?

Wylie graced our lives 28 years ago. He was our first child, our joy and hope. We called him Smiley Wylie. He was diagnosed with a type of brain tumor called a medulloblastoma when he was 11 yrs. old, in the prime of his youth. This is the most common type of cancerous brain tumor in children, but not easy to cure, especially when it recurs. It appeared mysteriously and came back with a vengeance.

Wylie loved every day of his 13 years. He was a happy soul. His wit and humor was contagious. This was a child with a creative hand and imagination from other worlds. Wylie’s potential had no limits. When told of his health predicament, Wylie donned his armor and was determined to fight for every precious day of his life. His courageous battle lasted 16 months and his bright spirit lives on with us today.

What are the goals of Wylie's Day Foundation?

Wylie’s Day Foundation (WDF) originated in 2005, the year Wylie passed, as a way to honor the life and memory of our son. Our mission is to provide “direct” funding for medical research towards a cure of Pediatric Brain Tumors so that one DAY no child need suffer from such a difficult journey. We fund innovative research directly related to a DAY where treatment for childhood brain tumors is less toxic and ultimately curative. The WDF also assists children and their families, who are fighting pediatric brain tumors- to make their DAY a better DAY, by funding beneficial programs and activities.

What is the focus of Wylie's Day Foundation's efforts?

The focus of our funding is on collaborative research among leading children’s hospitals throughout the US. We seek the top scientists with the most promising novel therapies. There have been no new drugs or treatments for kids for over 30 years and it is time for cures for our kids. We have been funding research for 16 years and are not giving up Until the DAY we find a cure. Our doctors are not giving up, our children do not give up, neither will we!

Philadelphia is our home and we are fortunate to live close to the nations leading Children’s Hospital, CHOP. This is where Wylie was treated, although 2nd, 3rd and 4th opinions were sought from other institutions. We could not have worked with a finer team of doctors and clinicians, but there was only so much they could do when Wylie’s tumor recurred. We sought clinical trials and prayed a lot. After 16 months of excruciating treatments, Wylie died and we vowed to try to find cures for pediatric tumors. The majority of our funding supports research of recurrent medulloblastoma, but we recognize this is not a disease in a silo and often go outside the box to collaborate with other foundations and, especially with larger group efforts such as CBTN and PNOC (Pacific Pediatric Neuro-Oncology Consortium)

In what ways do you support the brain tumor community?

We have actively supported the brain tumor community by hosting fundraisers, participating in the CHOP Parkway Run with huge support teams for 16 years, joining forces with other foundations to get bills passed for government funding and for pharmaceutical companies to give equal time to develop drugs for pediatric cancer as they do for adult cancers.

Why does Wylie's Day Foundation support the CBTN?

The CBTN has been an instrumental player in the journey for cures for pediatric brain tumors. Their vision is progressive, thoughtful, all-inclusive and focused on excellence as well as on our children. Behind the scientific workings and brilliance of the CBTN, there are very real, extremely compassionate people who care dearly about the future of our children. Wylie’s Day has been a member of the CBTN Advisory Council since 2013 and is proud to support their efforts.