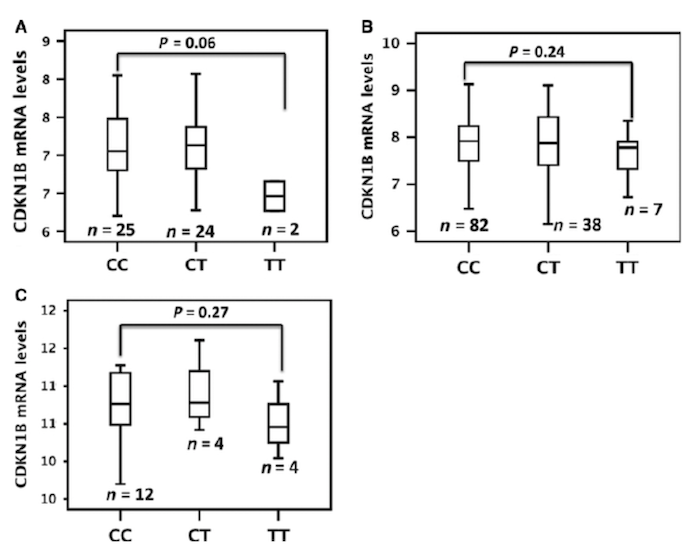 The genetic aetiology of sporadic neuroblastoma is still largely unknown. We have identified diverse neuroblastoma susceptibility loci by genomewide association studies (GWASs); however, additional SNPs that likely contribute to neuroblastoma susceptibility prompted this investigation for identification of additional variants that are likely hidden among signals discarded by the multiple testing corrections used in the analysis of genomewide data. There is evidence suggesting the CDKN1B, coding for the cycle inhibitor p27Kip1, is involved in neuroblastoma. We thus assess whether genetic variants of CDKN1B are associated with neuroblastoma. We imputed all possible genotypes across CDKN1B locus on a discovery case series of 2101 neuroblastoma patients and 4202 genetically matched controls of European ancestry. The most significantly associated rs34330 was analysed in an independent Italian cohort of 311 cases and 709 controls. In vitro functional analysis was carried out in HEK293T and in neuroblastoma cell line SHEP‐2, both transfected with pGL3‐CDKN1B‐CC or pGL3‐CDKN1B‐TT constructs. We identified an association of the rs34330 T allele (‐79C/T) with the neuroblastoma risk (Pcombined = 0.002; OR = 1.17). The risk allele (T) of this single nucleotide polymorphism led to a lower transcription rate in cells transfected with a luciferase reporter driven by the polymorphic p27Kip1 promoter (P &lt; 0.05). Three independent sets of neuroblastoma tumours carrying ‐79TT genotype showed a tendency towards lower CDKN1B mRNA levels. Our study shows that a functional variant, associated with a reduced CDKN1B gene transcription, influences neuroblastoma susceptibility.