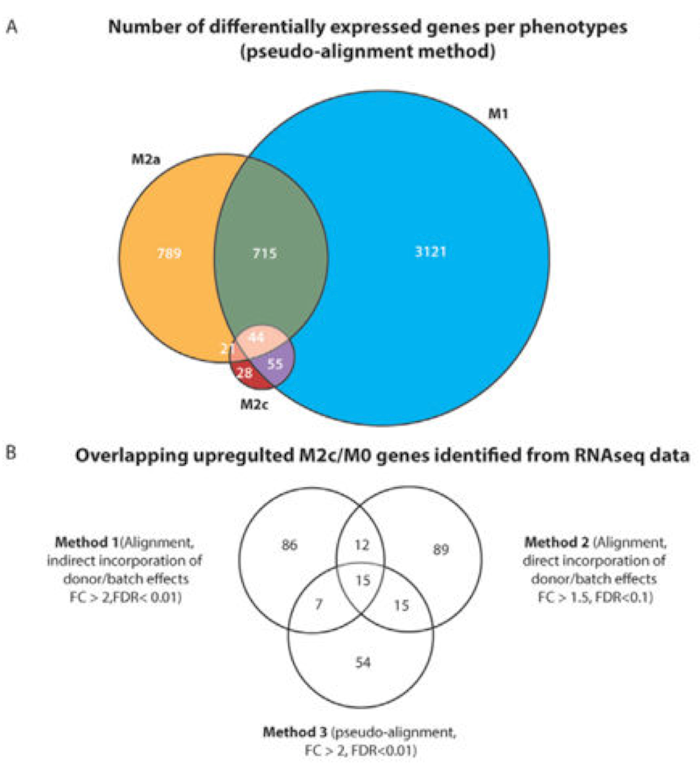 Alternatively activated "M2" macrophages are believed to function during late stages of wound healing, behaving in an anti-inflammatory manner to mediate the resolution of the pro-inflammatory response caused by "M1" macrophages. However, the differences between two main subtypes of M2 macrophages, namely interleukin-4 (IL-4)-stimulated "M2a" macrophages and IL-10-stimulated "M2c" macrophages, are not well understood. M2a macrophages are characterized by their ability to inhibit inflammation and contribute to the stabilization of angiogenesis. However, the role and temporal profile of M2c macrophages in wound healing are not known. Therefore, we performed next generation sequencing (RNA-seq) to identify biological functions and gene expression signatures of macrophages polarized in vitro with IL-10 to the M2c phenotype in comparison to M1 and M2a macrophages and an unactivated control (M0). We then explored the expression of these gene signatures in a publicly available data set of human wound healing. RNA-seq analysis showed that hundreds of genes were upregulated in M2c macrophages compared to the M0 control, with thousands of alternative splicing events. Following validation by Nanostring, 39 genes were found to be upregulated by M2c macrophages compared to the M0 control, and 17 genes were significantly upregulated relative to the M0, M1, and M2a phenotypes (using an adjusted p-value cutoff of 0.05 and fold change cutoff of 1.5). Many of the identified M2c-specific genes are associated with angiogenesis, matrix remodeling, and phagocytosis, including CD163, MMP8, TIMP1, VCAN, SERPINA1, MARCO, PLOD2, PCOCLE2 and F5. Analysis of the macrophage-conditioned media for secretion of matrix-remodeling proteins showed that M2c macrophages secreted higher levels of MMP7, MMP8, and TIMP1 compared to the other phenotypes. Interestingly, temporal gene expression analysis of a publicly available microarray data set of human wound healing showed that M2c-related genes were upregulated at early times after injury, similar to M1-related genes, while M2a-related genes appeared at later stages or were downregulated after injury. While further studies are required to confirm the timing and role of M2c macrophages in vivo, these results suggest that M2c macrophages may function at early stages of wound healing. Identification of markers of the M2c phenotype will allow more detailed investigations into the role of M2c macrophages in vivo.